„Wow!  That was my first reaction after the Stanwood Precision Touch Design was installed.  Suddenly I was able to play passages that had always eluded me, or demanding pieces like the Chopin etudes that previously I could only stumble through.  In the past I assumed the problem was with me.  What a revelation to discover that I had much greater potential as an amateur pianist than I ever imagined - as long as the piano was performing at its top capability.

David Stanwood selects his technicians carefully and trains them well.  My technician wanted to understand completely what I was looking for in a piano action, and exactly how I played the instrument (did I stroke the keys, or push down more heavily).  Everybody's style of playing is somewhat different, and one of the great benefits of the Precision Touch Design is that it corresponds to your style of playing.  My technician also recommended an enhancement to the Precision Touch Design - adding magnets to the action to improve responsiveness and tonal control.

I was nervous at first about installing the Precision Touch Design.  My instrument is an older model Fazioli F228, which is already an exquisite piano.  The Precision Touch Design improvements, however, were immediately discernible and very substantial.  They made playing a superb piano even more enjoyable.  Frankly, I wish I had done this a lot earlier.  I wasted years blaming myself and my technique, when all along it was the instrument that needed improvement.

I'll leave you with just one example.  Beethoven's last movement of his Waldstein sonata has some famous octave glissando passages.  I always played these glissandi with two hands, like the editors' notes suggest "for the modern piano."   Everybody knows the modern grand piano's action is too heavy when compared to Beethoven's instrument.  A few months after installing the Precision Touch Design I was playing through the Waldstein sonata and nearly fell off the piano stool when I discovered I could play these octave glissandi as written, with just the right hand.  Somehow David Stanwood has discovered a way to transform the modern grand piano into an instrument capable of performing with all the lightness of an early 19th century instrument, without sacrificing any of the depth of tone.

"Stanwood and my tuner transformed my instrument so that each key has the same exact tension from top to bottom, as you press a key."  Keith said. "It eliminates the inertia starting to press a key, which is called the breakaway.  So playing very soft is possible for the first time, while still in total control.  You can also get true legato on it, which is great for Mozart."

"This is FRESH AIR.  I'm Terry Gross.  One of the most famous pianists in jazz, Keith Jarrett, a musician acclaimed for his emotional intensity and his physically energetic, improvised, solo, piano performances, has had to keep his playing to a minimum in the past few years.  He's had chronic fatigue syndrome since 1996.  We recorded an interview with him from his home and discussed how
his illness has changed his approach to music.  We also talked about his childhood in Allentown, Pennsylvania, when he was a piano prodigy. Jarrett says his health is improving, and he estimates that he is now about 70-percent recovered.

Last year, he released a solo album of ballads called "The Melody At Night, With You," which was recorded at his home.  We'll listen to some of it.  And we'll also preview his new trio CD of standards, called "Whisper Not," which will be released in October.

Jarrett used to be pretty manic in concert and very obsessive about his playing.  I asked him how those traits have been affected by chronic fatigue syndrome.

Mr. KEITH JARRETT: I had to change everything about my approach before I could even start to play again.  And "The Melody At Night, With You" was--is never going to be--there won't be another recording that's more important to me, in many ways.  But one of them that I can explain easily is that I had not played for a long time.<snip>

<snip>
Mr. JARRETT: Now there's so much to say about each song ("The Melody At Night,With You,"), because of the way the piano...  I had had my piano overhauled in a special action,... a major change in the action.  It gets technical if I try to describe all the things that happened, that were a part of that recording, without one of them, it would have failed.  I would have, maybe, had something to give to my wife, but I wouldn't have listened to it and thought it would translate into everyone's home.

GROSS: So what you did was change the action on the piano so that you could have a lighter touch and still have the piano resonate?

Mr. JARRETT: Well, no.  It's actually more complicated than that.  There's a thing called the breakaway, which is like surface tension on water.  Every piano that's stock from any company that I know of has a break-away.  In other words, when you first push the key down, it's harder, and then it's not.  So if you wanted to play very very soft, you still would be taking a giant risk because you'd have to press hard first, and then you'd have to let up before you hit the string.

Mr. JARRETT: And that's what every pianist is dealing with all the time.  And then I heard about someone (David C. Stanwood) who was able to, using little springs and a whole barrage of ideas, including taking all the parts out of the piano, and weighing them all, and making them exactly the same weight,... every little piece of wood and metal I guess and all the bushings.  Everything had to be the same exact weight first.  Then he has a way where that break-away doesn't exist, but the action's the same weight resistance against your finger.  So it's a more liquid action when you press down.  If you want to play loud, you can still play loud, but there's not that initial snap.  You don't need to snap the key.  So if you listen to "The Melody At Night, With You" on a good system, you notice the dynamic range is pretty wide for a piano recording that sounds so closely miked.  And I think that's a lot to do with that action. 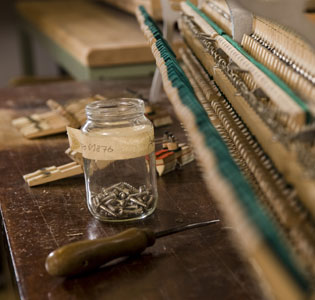 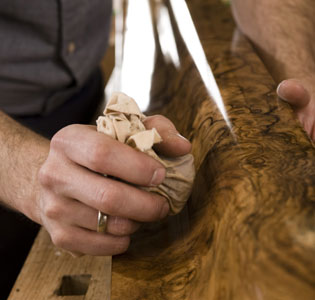 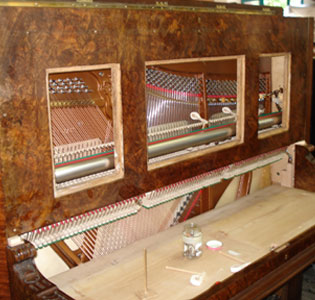